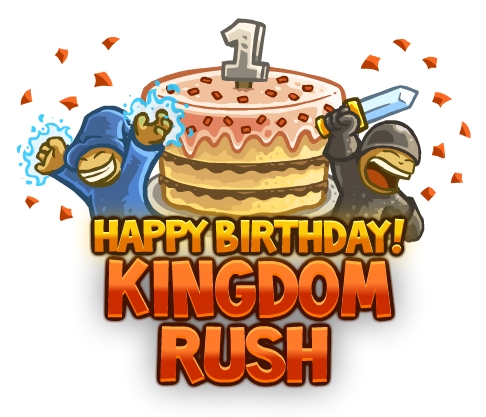 It's been a year since Kingdom Rush made it's first appearance at Armorgames, and since it's release things became very exiting at Ironhide!

Kingdom Rush quickly became one of the top games on Armorgames, Kongregate and several other gaming portals worldwide and we have received a lot of love from gamers who enjoy our game. As of this date Kingdom Rush has been played on flash over 140 million times!! That alone for us is incredible!

A few months after the flash release we took the game to iPad where it enjoyed a great reception too. We were a bit afraid a flash game may not cut it for the mobile world, but it did. It did very well becoming the #2 top paid app on the US appstore and top #1 on several others around the world.

Kingdom Rush also earned several awards and outstanding reviews. It got Game of the Year and Best Strategy Game on Jayisgames.com, Best Strategy and Community Choice on the Mochi Awards 2012, Game of the Year on our national video game contest with a price to attend GDC where we met several fellow developers and also fans of our game.

Thanks to Kingdom Rush we were able to get out of the "garage" and start a company. We started being 3 friends with the dream of making our game for people to enjoy and today we are a team of 6 living the dream. So we want to celebrate with everyone who made this possible, our publisher Armorgames that trusted on us and our work, our friends and families for keeping up with us all along the way and on top of all, you, the fans and players for the constant support, great feedback and the reason we create games.

So as part of the celebration we are going to disclose the status on our current proyects:

We'd like to tell you first that the next chapter of Kingdom Rush is very advanced but we decided to make a big change that set us back by a few months. The first game would have 4 new specialist towers, 2 new powers, 3 new terrains and all new enemies. But we changed things a bit, so the new version will have all new specialist towers instead, it will of course keep the new terrains and enemies but will also add hero units as part of the game. It will be like the first game, but a whole new adventure!! And we expect to release it by the end of the year (maybe earlier)

For the Android fans, (we know you are expecting news) we want to let you know we are exploring a way of taking the game very fast to Android. This came as news to us too and made us very happy about the possibility of having the game on Android quickly and although we cannot confirm it will work yet, we just wanted to share the good news with you all. So stay tuned :)

On other proyects, the Kingdom Rush Comic is looking awesome and issue #1 will be published very soon (less than a month we hope). We are outsourcing this proyect so rest assured it is not taking time off the Kingdom Rush sequel.

What about Kingdom Rush? Well Kingdom Rush is receiving an update very soon with an extra stage and an extra hero! Also for the flash audience the update is bigger since it will also include the Heroes that where exclusive for iOS (until now!)

That's it for our proyects! (Hope you like the update) BUT! it wouldn't be a proper celebration if there is no free stuff! So we are giving some to our readers!


How do you get them? Simple.